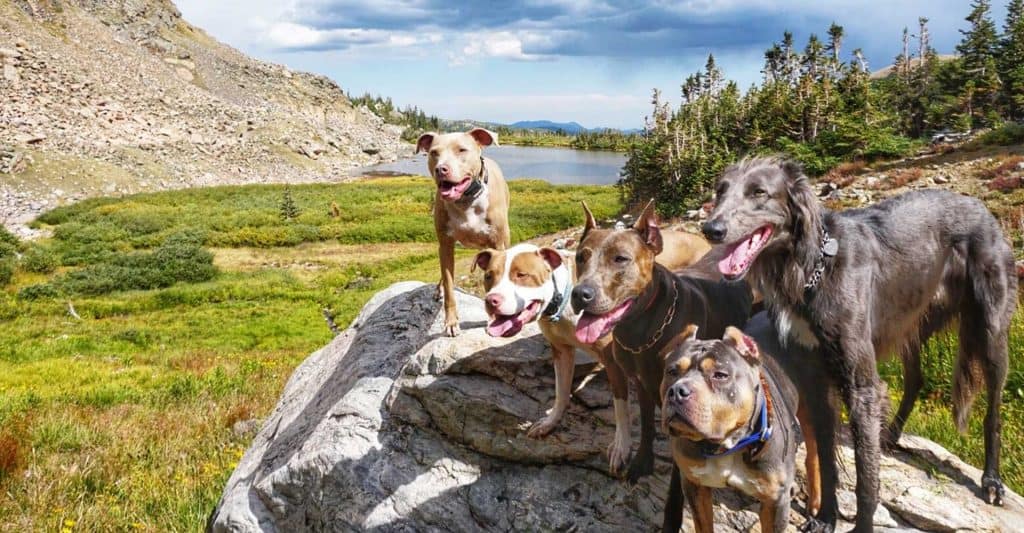 Everyone loves an appropriately behaved dog, right? A dog that can play well with others, a dog that does not jump on guests and a dog that is well adjusted in any scenario you put him in. We as humans sure have our own ideas about what makes our dogs appropriately behaved. We want dogs to do the things that WE want them to do, all the time, every single day. We stop them from doing natural behaviors like sniffing and exploring because we want them to sit and down and stay. To most people a dog that is obedient and follows instruction is a good, polite dog. So why do people get so bent out of shape when dogs politely greet one another? That butt sniffing just makes us so awkward, doesn’t it? Because we cannot possibly conceive of greeting another human being in such a manner, we transfer that emotion onto dogs when it comes to them smelling each other. We pull our dogs away when they are trying to get information about the other dog and add tension to this normal exchange. If the dogs are commingling in a group setting, we interrupt this transaction verbally. It makes us feel weird, uncomfortable, and we typically stop this behavior as soon as it starts. But your dog was being appropriate and polite! Why would we stop that? We stop it because we don’t like how it makes US feel and here your dog is, being all polite.

Generally speaking if your dog does not want to smell other dogs’ butts, that should actually be a blaring red flag to you. It tells you that your dog is either too fearful and overwhelmed by the environment, they lack basic social etiquette, or they are in a really unhealthy state of mind where they are not engaging their nose. Not allowing your dog to sniff the rear end of another dog is like allowing your child not to say hello when someone greets them. It’s rude and you’re actually preventing social behavior and discouraging self confidence. Dogs should not be ramming their noses up other dogs’ butts, nor do they need to say hi to every single dog that passes by. That is super rude and inappropriate. A nice nose to tail greeting should consist of a few nice whiffs without necessarily even making contact with the other dog.

I do not condone random on-leash greetings.  It’s not that I have never allowed my dogs to greet other dogs on-leash, but in the rare exception that I do, I am reading the other dog’s communication and using my instincts, plus my years of experience to assess the situation. I will never have a green light attitude towards on-leash greetings, but there is a way to facilitate them more safely and less stressfully for both parties. When dogs are on a leash they are essentially trapped. Simple flight or fight instincts kick in the more a dog feels threatened by lack of options to alleviate what is stressing it. When we have removed option number one of flight, dogs are going to be much more likely to react defensively and “fight” to push back the dog that is now making them uneasy.

If you’re going to do it do it right. If you want your dog to meet a new dog on leash, here is how I recommend facilitating it:

The first thing you need to assess is what kind of equipment is on the other dog and what its current behavior is like. If the dog is in any kind of a body harness I would pass on meeting that particular dog. The harness empowers the dog as the dog braces into the harness with its chest, the strongest part of him. The handler does not have control of the dog’s head. If you don’t have control of the dog’s head, you do not have control of their mouth. Additionally if that owner was to put tension on the leash the dog is going to be on its hind legs within seconds which will feed a lunge/snarl/snap type behavior much more easily. Both dogs need to be on collars, preferably a slip lead, or prong collar, a head harness would also do. These tools will give the handler the most control. Doing this exercise with a perfect stranger will prove risky as they are not necessarily going to follow your lead to the T and anything can go wrong, making both dogs fail. This exercise is best performed with two on-board handlers and dogs that are not lunging, barking or whining. If you think you have found the appropriate pair to practice this exercise with, here is what an “on-leash-stacked-greeting-in motion” should look like:

One handler and dog is going to take off walking while the other handler and dog walk behind them. While the dogs are walking you are going to allow the dog that is behind to slowly drift forward on a LOOSE LEASH and sniff the butt of the other dog for no more than two seconds.

Handler of the dog being smelled is going to encourage their dog to move forward with some soft, verbal praise and patting their thigh. They are going to ensure that their dog does not whip around and go face-to-face with the dog that is momentarily investigating them. Believe it or not the faster you move the easier this exercise is to do. It is much easier at a jog than it is a walk.

After the two second sniffing you will promptly turn around and change walking directions, switching roles of ‘smeller’ and ‘smellee’. The number one most important thing to remember is to KEEP MOVING, again KEEP MOVING. People tend to stop moving as soon as the sniffing is actually taking place. Bad idea. Motion is your best friend in an on-leash dog greeting. Do not let the dog who is smelling ever sniff any longer than three seconds. Two seconds is more than enough. Once you do this a couple of times, walk the dogs side-by-side together.  The thrill of smelling one another will be over and they should be far less interested in one another in an excited way. This will be a much healthier state for them to be in for further socialization.

That wasn’t so bad, was it? When you see your dog want to gently sniff another dog’s butt you should be proud, really proud that your dog knows how to communicate and greet so nicely. If your dog pounces on other dogs, trying to play immediately and avoids sniffing, you can’t allow that. Never make excuses for your dog, “oh, he’s just excited.” That behavior can lead to getting your dog snapped in half by another dog who is incredibly intolerant of rude behavior. If you do allow your dog to meet unknown dogs, it is a game of Russian roulette. If your dog likes to sniff other dogs, but doesn’t like to be smelled you should practice this exercise with a trustworthy partner and dog that is super neutral. Too often I see people pulling their dogs away from another dog’s butt and allowing them to “say hi” face to face. Your dog had the right end. Face to face in the animal world is confrontation, let alone if you throw some good tension in there while your dog is being restricted by a rope.

Doing this controlled stacked greeting can actually be quite beneficial to a lot of dogs. But allowing a strange dog to come up to your dog with tension on the leash could be the moment that ruins your day, week or year. So you’re saying that dogs sniffing each other’s butts is good, but you shouldn’t let them meet on leash? Yes, that’s what I’m saying, unless the transaction is being controlled by two aware handlers with the same goals who can vouch for the dogs’ past behavior. Be smart, be safe, and be selective if you are going to allow your dog to engage in this type of restricted greeting. If your dog is mingling off leash with a group of stable dogs, smile every time you see them take a butt-wiff.

Facebook
Twitter
LinkedIn
PrevPreviousIs a Dog’s Comfort Zone Really That Comfortable?
NextWe are getting so much out of him as he is both smart and well trained…Next

Corrections: Your Environment is Trying to Tell You Something

Why You Shouldn’t Take Dog Training Advice From Your Vet

If I had a dollar for every time I’ve heard a dog training client tell me, “My veterinarian said not to take my puppy into

Have you ever tried to stop someone from approaching your fearful/nervous dog and no matter what you said, they still approached? This scenario has happened